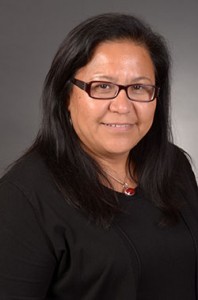 Nozhem (“Mother Wolf”), of the Wolf Clan, is from the Delaware First Nation of Moraviantown, Ontario. She is the mother of 4 and grandmother of 6.

Carol Hopkins is the Executive Director of the National Native Addictions Partnership Foundation, an organization whose mandate is to support Canada’s First Nations Addictions programs. Carol came to this position from Nimkee NupiGawagan Healing Centre Inc., a youth solvent abuse treatment centre that is founded on Indigenous culture and life ways, where she was the founding Director for 13 years.

Carol was the Co-Chair, First Nations Addictions Advisory Panel whose mandate was to develop a renewal framework for the national Native Alcohol and Drug Abuse and the Youth Solvent Abuse programs. Carol now co-chairs the Leadership Team whose mandate is to implement the renewal framework. This process is a partnership between the Assembly of First Nations, National Native Addictions Partnership Foundation, and First Nations and Inuit Health Branch of Health Canada.

Carol’s work in the field of addictions also included serving as the Chairperson for the National Youth Solvent Addiction Committee (YSAC) from 2000 to 2007. This national committee has maintained a partnership with many groups to develop best practice guidelines for culturally based inhalant abuse treatment.

Carol has represented First Nations clients on the Board of Directors for the Canadian Council for Health Services Accreditation, now known as Accreditation Canada. With YSAC, Carol was involved in the development of the Accreditation program and standards. She also was a Surveyor for CCHSA in both the mainstream health care system within Canada and within First Nations community health and addictions organizations.

Her strength in the health profession is the ability to blend western and Native traditional health & healing practices in a competent and responsive manner. In this regard, Carol has taught for various post secondary institutes, including Anishinabek Education Institute, Native Social Work program at Laurentian University and currently is also a Professor in the Social Work Program at Kings University College of the University of Western Ontario. She holds a Masters of Social Work Degree from the University of Toronto. Carol has received the Walter Dieter Award from the Assembly of First Nations in recognition of academic achievements made in the field of Social Work with First Nations.